skip to main | skip to sidebar

I Need a Supply

I've known about online retailer Need Supply for a good amount of time now, but it's been a while since I've checked in with their site, mostly because I've been boycotting all online shopping in an attempt not to further max out my credit card. My debt runs deep! But that's another story... I logged on to Need Supply recently and fell in LOVE with their selection of shoes, particularly the range of low heeled, sassy booties.

Check out my picks below... 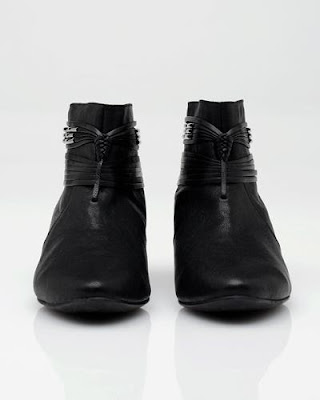 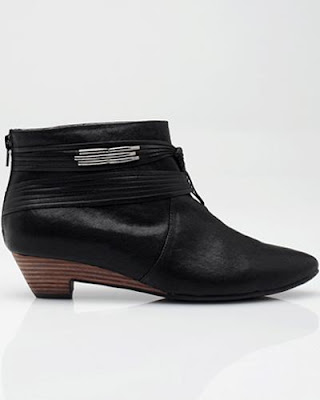 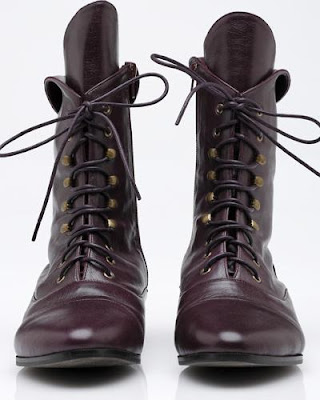 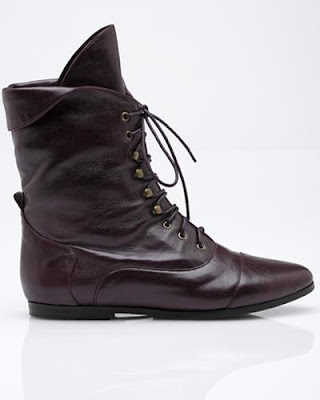 Jeffrey Campbell. The Everybody. 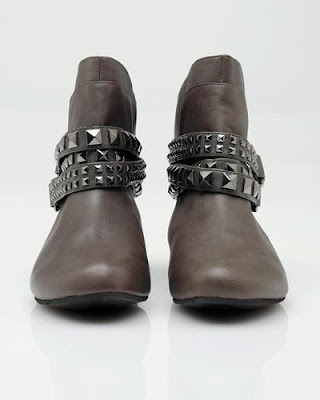 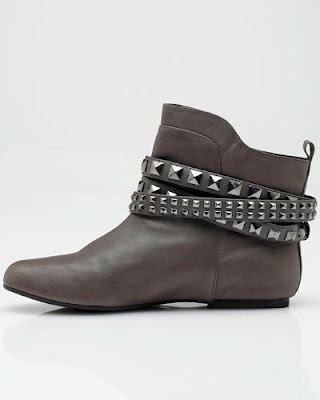 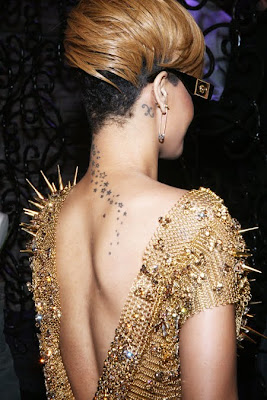 Princess Rhi-Rhi at her album release party showing off the tattoos and rockin' a safety pin earring. Still sweatin' her! Or her stylist that is.
Posted by Gee at 12:38 PM 1 comment: 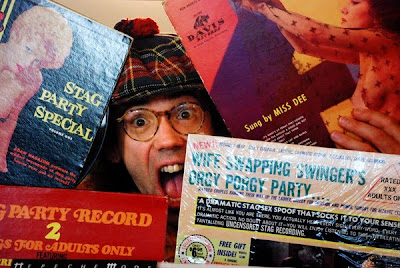 I bow down to the wonders of my lady lover Absquatulation for introducing me to perhaps one of the single most entertaining things I've seen since Tyra decided to do that episode about botched booty implants (the hilarious horrors!).

1. He is from Canada.
2. He got Vanilla Ice to do a really bad freestyle. And dance too.
3. He wears a very fresh plaid driving cap. With a pom-pom atop it.
4. He knows his way around a library better than that antisocial kid you roomed with Freshman year.
5. He is a menace with the mic. And by menace I mean that he jams it so far up everyone's face that he might as well start smacking them upside the head with it.
Nardwuar, you are officially more entertaining than Tyra's five head and bad weaves! And that speaks volumes in itself. Watch his interview with Pharrell and Shay below, it is phenomenal!

So now that WTWTA pandemonium has officially subsided, I can start liking Wild Things again without feeling like a huge d-bag, a-hole, or jerk. Or any number of synonyms for those words. 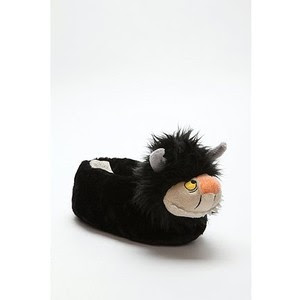 Where the Wild Things Are Slipper from Urban 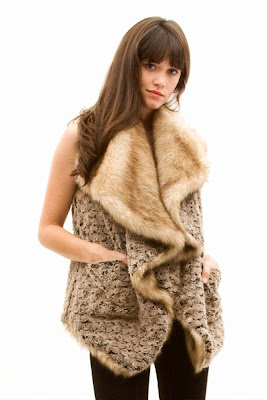 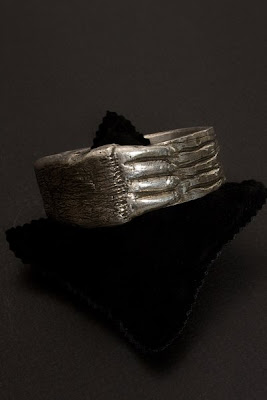 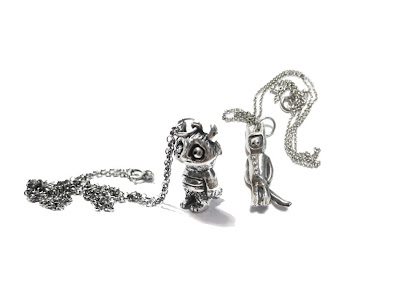 WTWTA x Roadkill Max and Carol Pendants
Posted by Gee at 9:01 AM 3 comments:

Labels: Accessories, hipsters, Spike Jonze, Where the Wild Things Are

I Am Not a Stalker? 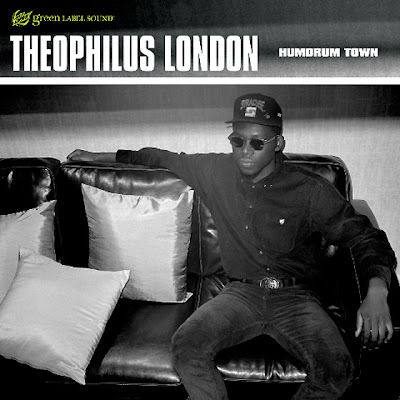 Everyone knows that I love Theophilus London. This is proof, and this is more proof. What is NOT proof is the time I stalked him after his show. Definitely not proof. Pftt, whatever!!

Anyways, he recorded a new version of Humdrum from his This Charming Mixtape featuring a new instrumental by Mark Ronson, as well as a new verse. Listen to it here. 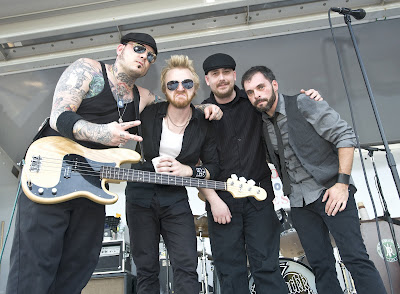 So, yeah, recently I had the chance to catch up with New York based band The Jett Blackk Heart Attack, and they are KIND of really interesting! The band, which has collectively played together in some form or another for over 20 years, is a throwback to the roots of metal and rock and roll. Although I am not the biggest hard rocker, I appreciate all forms of music and have a super huge respect for 1970s metal, because a lot of 90s grunge rock took great influence from earlier metal. Plus, the guys in The Jett Blackk Heart Attack rock some wickedly awesome old school style creepers, so I automatically had a soft spot in my heart for them!

Recently, they have had a string of gigs all over New York state and are working on a record, tentatively titled Needle To the Groove. So, it was as good of a time as any to learn a bit more about their sound and what they have in store for the future...

TLF: The Jett Blackk Heart Attack is a combination of "roots of metal" and... what else? Describe the sounds that influence you as a group, as well as each of you personally. Do you feel like the combination of your personal and group influences meshes well, or are some of you guys working with influences that an audience would never expect?
JBHA: For us, the "roots of metal" lie within the hard rock of the late 60's and early 70's. Bands like Deep purple, Black Sabbath, and Led Zeppelin really shaped everything that came after them. We are influenced by many of the bands of that era- aside from the aforementioned holy trinity of hard rock, we're also influenced heavily by bands like AC/DC, MC5, Blue Cheer, The Sonics, ZZ Top, and Jimi Hendrix. But there are some influences that our audience wouldn't expect- modern influences like the Swedish band- Dungen, Stone Temple Pilots, Alice in Chains, Death From above 1979, and Velvet Revolver. It's all about true hard rock when it comes to what we do in The Jett Blackk Heart Attack. All of us in the band are lovers of all types of music. But what we are doing in this band, is really striving for pure hard rock, in a classic sense.

TLF: You all have been playing together for almost 20 years, correct? How did you meet and form, and what were the trials and tribulations along the way (there has to have been at least one you can share with us!)?

JBHA: To clarify, on and off for 20 years. We had a few bands together. First we were called "False pride", that was from 89-90. We thought we were so cool... ha ha man were we wrong! But, a few years later we started a hardcore band called "Tension*" with my brother Mike on vocals. That went from 92-2000. Many trials, many tribulations, many great stories and many great memories. Growing up back then in the Long Island Hardcore scene, we were an untouchable family. Every weekend there was a show with close to 1000 kids, and everyone knew everyone. It wasn't just a trend, it was a lifestyle..and many friendships were bonded, that's actually when we first met Dave Case. He was playing bass in a band called "Cleanser" and that's also where a lot of the bigger bands like Taking back Sunday, Glassjaw,Brand new and Head automatica all came from.We all hung out together and played shows together. No barricades, no bouncers, no egos, just family and friends .The bands and the fans were all on one level. After Tension* had broken up in 2000, we all went on to do other things. In 2007 we had a reunion show as Tension* and decided to keep playing together, but take the music in a different direction That's when we recruited Dave Case, who was exactly what we needed to complete the Jett Blackk sound.

TLF:Live performance is a big part of any band-- describe a The JBHA performance in three words! Who are some of your performance idols, and what do you hope fans walk away with after each show?

JBHA: The JBHA performance in 3 words: exhilarating, nostalgic, memorable. Lets face it, these days if you are not at least exhilarating to watch then why am I paying good money and wasting my time to go "see" your band? They call it a show, put one on please! Nostalgic, because our show musically lends itself to an era that gave birth to a lot of music that is still being listened to and appreciated today by fans both young and old. Although it may be your first time seeing us, it still seems familiar; comfortable almost. And third, memorable because every time we look out into the crowd, we see everyone singing along to every song. That speaks for itself.
As far as having performance idols... some of the slinkier types of performers, like Scott Weiland, Layne Staley and the late great jim morrison. Man, that guy didn't have to do shit and it was genius!! And of course those front men had world class performers onstage with them with which to interact, so we make sure to have good physical alchemy while performing. It is very important to look like you love each other and are happy to be sharing the stage, which is very easy for us 'cause we do, and we are.

TLF: There are a lot of "roots of metal" bands out there, but what do you think sets The JBHA apart from the rest of the modern musical landscape? What makes you unique, in addition to your sound?
JBHA: Because of our age (early 30's) All of us in the Jett Blackk Heart Attack grew up on the metal of the 80's (Metallica, Judas Priest, Slayer, Exodus, Voivod, Megadeth, Nuclear Assault etc) our first bands early in our careers were modeled after those bands in one way or another. As we've grown up we also were well aware and respectful of the bands that are considered "Roots of Rock and Roll". I think the best hard rock bands and artists in rock history are based off of blues and legends such as Led Zeppelin, Cream, Jimi Hendrix, AC/DC, Deep Purple, ZZ Top etc. Most people will argue the sweet years of rock were from 1968-1978. Rock bands had so many different ways of musically expressing themselves without any real boundaries or expectations back then. They just went out and kicked ass. That's what makes us unique. It's our ability to connect all age groups. We love young kids skateboarding to connect with us all the way up to adults that lived the good old days of rock back in the day. It's really trying to combine the "classic" with the "modern" eras.
TLF: Lastly-- tell us what's up with you guys in the future! Any shows, CDs, EPs, or events we should know about?

JBHA: Basically The JBHA is a band that will always be doin' our thing.and as much as any band would like to "get signed"..we refuse to just sit around and wait to make things happen. Especially in a time where bands should only be counting on themselves to make the moves they need to make to succeed. We are very lucky to have a lot of talented friends in our corner helping us out. As of right now we are in the process of recording our first full length record titled "NEEDLE TO THE GROOVE" with producer Joe Cincotta of Fullforce studios.
We also just finished our video for the single "Hell or high water" with director Christian Winters. We just finished our website www.thejbha.com.We also have The Jett Blackk Heart Attack iphone app that can be purchased in the itunes app store. We are like rock n roll sharks,we gotta keep eatin and we gotta keep movin!! There's a lot goin on with us at the moment and we wouldn't have it any other way.Its how we roll. we love what we do and we stand poised to take on the world..because the future is JETT BLACKK!!!!

Excuse me while I go rock out now. Hard.

Find out more about The Jett Blackk Heart Attack on their website, and keep up with their release date info and tour stops!
Posted by Gee at 11:47 PM 1 comment:

Gee
A look at life, style, and all around good times from a streetwear-obsessed, fashion loving, vintage rockin' New Yorker.